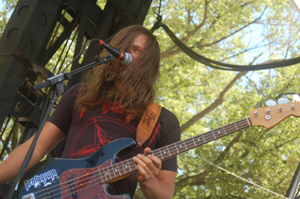 Witchcraft: Swedish? Yes. Metal? Yes. Death? Er, no, just doom, thank you very much. Trading in the currency of dark harmonies popularized by Black Sabbath in the old school and The Sword in the new, they provided a thoroughly bracing wakeup call first thing Saturday afternoon. It was still way too early in the day for their riffage to bring together a sea of nodding heads, but a small pool of them still counts for something. 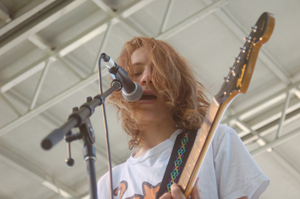 Tiny Masters of Today: The Paul Green School of Rock may get all the musical-prodigy press, but it speaks a few volumes when David Bowie is your biggest fan and Karen O comes calling to work with you. If you close your eyes, Brooklyn siblings Ivan and Ada play tracks like “Hey Mr. DJ” and “Stickin’ It to the Man” just like any number of anonymous fuzzed-out garage rockers. If you open them and see that they are just 14 and 12 respectively, you might understand just how far they’ve come and how far they could go. 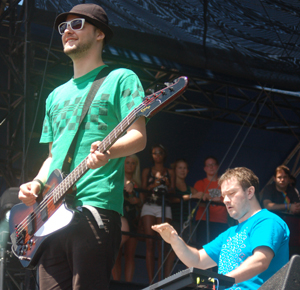 Does It Offend You, Yeah?: On their debut album You Have No Idea What You’re Getting Yourself Into, the remixers-cum-rockers in this British group sound dangerously like a low-rent Justice knockoff, which is pretty drastic as knockoffs go. On stage, however, there’s actual singing, playing and whooping-it-up to be done. Watching these cats plow through microphone stands and flying-V guitar solos gives material like “Being Bad Feels Pretty Good,” “We are Rockstars” and “Let’s Make Out” party-anthem momentum. Coming across as equal parts Suicide and pre-punchline Limp Bizkit, DIOYY seem to be one of those groups like The Bravery who score higher marks in concert than in the studio. 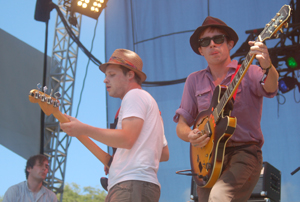 Dr. Dog: Somewhere there’s a law against writing a Dr. Dog review without using either “ramshackle” or “shambling,” and the Philadelphia quintet did not disappoint their midday MySpace stage crowd. A peek at their setlist alone suggests just how cool and collected the band can be, titles like “The Way the Lazy Do,” “My Old Ways” and “Livin’ a Dream” drenched in the harmonies and jangle of three killer B’s (Beatles, Beach Boys, Byrds). And lest we suggest Dr. Dog rest on such laurels, they proved themselves perfectly capable of turning things up a few notches during their hour, most notably in “The Old Days.” 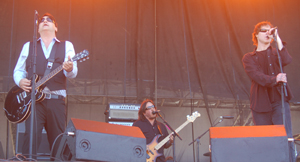 The Gutter Twins: The breadth of festival lineups is such that you’re bound to encounter a few acts where you wonder if their material is suited for their particular venue or time slot. (See Witchcraft, above.) Like much of their other work, this project of well-traveled alt-rockers Greg Dulli and Mark Lanegan concerns music of dark places and secret spaces. It deserved a home on the main AT&T stage, but at 2:30? With the way their touring schedule runs, fans hungry to hear them took what they got. The Gutter Twins aren’t the most exciting band to watch, but knowing their pedigree and sensing the brooding in fantastic Saturnalia tracks like “Each to Each,” “Seven Stories Underground” and the screaming “Idle Hands,” neither the stoicism nor the sun was paid much heed. Nor, for that matter, was the fact that they padded their 10-song set with a few Twilight Singers songs (“Bonnie Brae,” “Number Nine”) and Massive Attack cover “Live with Me.” 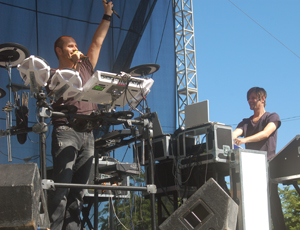 Booka Shade: Pure electronic music was for some reason mostly absent from the big stages—and come on, does cut-and-paste DJ Girl Talk even count anymore? With a reputation staked on their monster hit with M.A.N.D.Y. “Body Language,” mixes for the likes of Roxy Music and Moby and three rather punched-up albums, the German duo Booka Shade seemed to relish the opportunity to prove why they were the genre’s biggest name on the Lollapalooza poster. Walter Merziger and Arno Kammermeier wore permanently plastered smiles behind their respective rigs, and their time on stage was (with one well-planned fake-out exception) a measured study in all the conceits of the world’s best techno—the peaks, valleys and lockstep grooves—with none of the conceit. Kammermeier’s appeal “with love from Berlin” could easily have been “wave your hands in the air like you just don’t care,” a sign of more electronic passion here than in Friday night’s Radiohead set twice its length.