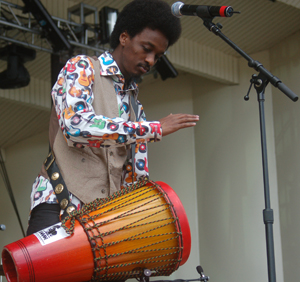 K’naan: Tempered by the atrocities of civil war, steeped in language first learned from Nas and Rakim, and mixed with the relief and joy of a new life in Canada, K’naan was something of a revelation. His voice strained to sing emotive lines in songs covering everything from chirpy tribal pop to prideful flag-waving in Mogadishu. With beats and bass coming in part from a laptop and a simple African drum, K’naan’s rapping was more solid and direct, in particular during “What’s Hardcore?” For any hip-hop artists who truly believe their hood life is hard, K’naan had Somalia’s killing fields as his backyard—experience like that, in his words, makes “50 Cent look like Limp Bizkit.”

The Black Lips: This Atlanta quartet were more than enthusiastic enough to tear through five albums’ worth of material, baking in the early Bud Light stage sun. Theirs was a fun and sloppy blues mess, channeling mostly MC5 and The Who with some nods to the trippy pop of early Pink Floyd. Occasionally a song like “Sea of Blasphemy” would cut clear through, but amid all of the boys’ twirling, jerking and wearing of funny hats was a sense of sameness to their psychedelic garage rock. 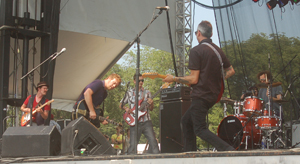 Rogue Wave: Despite their home base being Oakland, California, Zach Rogue and his crew discovered a soft spot for Chicagoland on last year’s Asleep at Heaven’s Gate so a Lollapalooza slot seemed like a no-brainer. That album’s “Chicago X 12” and “Lake Michigan”—especially the extended Pat Spurgeon drum solo to open the latter—drew the loudest cheers from the MySpace stage crowd. “Bird on a Wire” was also a standout during a pleasant and unassuming set that unfortunately had to battle a bit of sound bleed from Manchester Orchestra next door at the Citi stage. 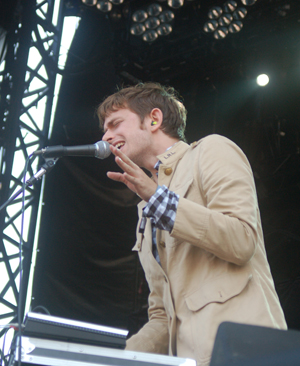 Yeasayer: It cannot really be this easy for artists like Yeasayer and their ilk to make electropsychedelia that’s just so freakin’ charming. Drawing the day’s first big crowds to the AT&T stage (the main southern stage yin to the Bud Light stage’s northern yang), they possess elements of that whole new wave of bleepy jammers like fellow Brooklynites Grizzly Bear but somehow make songs with sharper teeth. Their radio hit “2080” was delivered with gusto, soft-to-loud dynamics dominating tracks like “No Need to Worry” and “Wait for the Summer.” To our eyes, these guys were the first big winners of the day. 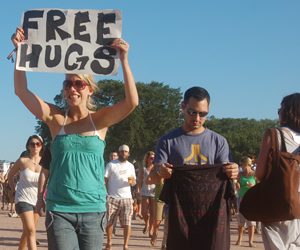 Jeff Tweedy: Along with Perry Farrell and Rogue Wave, the man who puts the will in Wilco stopped by the Kidzapalooza stage for a short acoustic set. Normally, this venue offering kid-friendly acts and really young rockers for hip parents who brought their children out for the fest was pretty lightly attended. While kids were still invited to be front and center to watch Mr. Tweedy, no doubt sweet solo renderings of songs like “I’m the Man Who Loves You” went clear over their heads and off into the fawning overflow crowd behind them. 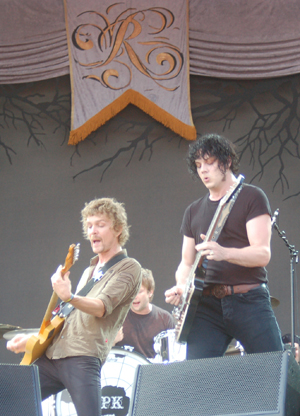 The Raconteurs: Forget what you’ve heard about Consolers of the Lonely showing off alt-rock supergroup The Raconteurs as mere apologists for the cartoonish bombast of ’70s rock. Damn near anything Jack White touches turns to gold, and in a live setting he and his homeboys had songs taking off. “Steady, as She Goes” featured AC/DC-like riff interplay between White and Brendan Benson; “Hold Up” was a proto-punk screamfest; “Rich Kids Blues” turned into a dark Southern-rock workout. Even the more sinister side White reserves for The White Stripes manifested itself in “Keep it Clean,” sung with an evil grin, and a rendition of “Blue Veins” that had The Greenhornes’ rhythm section supporting White’s sick work on distortion pedals. The worst thing about the set was the steady stream of fans heading south to see the night’s only headliners, Radiohead; they had no idea what they were missing. 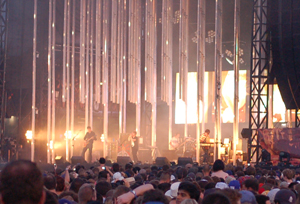 Radiohead: What fans and critics are rather loathe to admit is that Radiohead are incredible musicians making (for the moment) criminally dour music. Whatever reputation preceded the firm of Yorke, Greenwood & Co. seemed to fail to translate to actual magic in front of a capacity crowd at the AT&T stage. Sure, there were magical moments—”The National Anthem” buttressed by samples from local radio, weekly Chicago fireworks climaxing at the perfect point of “Fake Plastic Trees,” the super-dance-rock finale of “Idioteque.” But the ennui of many tracks from In Rainbows, lackluster takes on old favorites like “Lucky,” the evil whose name we dare not speak—Thom Yorke often goes flat live!—and even the offputting 6-up camera display on the stage’s jumbo screens amounted to Radiohead failing to grab Chicago’s keys to the city when offered them.