Three days done, one day left to go, and Roskilde 2008 draws to a close. With no less sterling a representation of diversity of then the previous three days, everything ended superbly, in spite of a mild outbreak of rain. 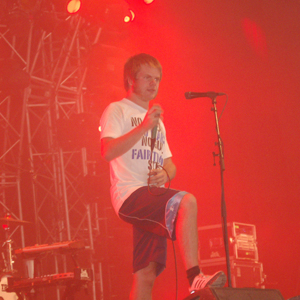 Hard rock acts Anti-Flag and Enter Shikari rocked afternoon crowds with an abundance of high energy. British upstarts Enter Shikari manically bounded around the stage (the guitar player even did cart wheels) playing a distinct hybrid of electronica and hard rock. Triggering most of the electronics from sequencers and synthesizers, the band’s “Return to Energizer” featured a purely digital bridge at the halfway point and a rambunctious riff. The band’s singer bated the crowd to show greater enthusiasm before the fast-paced “Anything Can Happen in the Next Half Hour.” Anti-Flag on the other hand effortlessly commanded their audience into a massive circle pit following their chant of “You’ll get yours when you’re good and ready / You’ll get yours and go straight to hell” from “Good and Ready” off of their latest album The Bright Lights of America. Intelligently demanding, “If someone falls, we pick them up,” while simultaneously invoking near incessant crowd participation. After chastising current President George W. Bush as “worst President in American history,” the group launched into their defiant call of “You gotta die / You gotta die for your government / Die for your country that’s shit.” 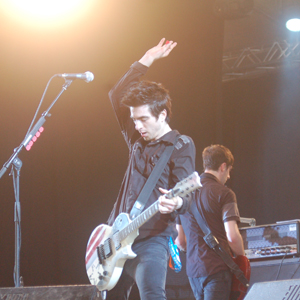 The gorgeous Danish local and former Zero 7 collaborator Tina Dicko (spelled Dico when performing in the USA) displayed similar potential for future greatness. Gathering a large crowd for an early afternoon spot on the Orange Stage and accompanied by a full backing band. Singing from the heart on romance and retrospection Dicko sweetly emoted “it’s all I ever dream of” and fondly remembered “the warm sand under my feet.” Perhaps strongest were the few songs Dicko sang sans-backing band, simply plucking her acoustic guitar. The strength of her voice lent much-needed sincerity to lines such as “thank God for this beautiful view.” 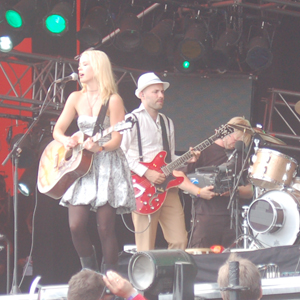 Later on, Cat Power failed to achieve the heart and spirit that nearly all previously covered female acts at this festival attained. Her performance did include a quieted version of Creedance Cleerwater Revival’s “Fortunate Son,” but the bar was simply raised higher than the half-hearted delivery heard here. Although undeniably talented, the music lacked edge to the point that some fans outside the Odeon Stage tent covering were literally falling to sleep. 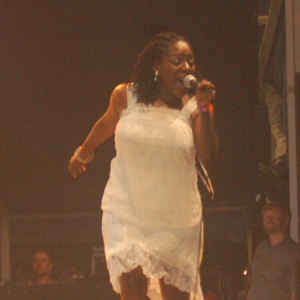 Enigmatically more entertaining, Sharon Jones & The Dap-Kings harnessed the raw energy of a gospel revival and the effortless chemistry of the JB’s. Playing a modern take on vintage funk and soul, lead singer Sharon Jones emanated pride and joy, confidently commanding the stage and the crowd. For a crowd justifiably fatigued from the long festival, the band’s rollicking showmanship had the attendees enthusiastically cheering. Along with “100 Days, 100 Nights” and “Be Easy,” the group ended with a moving tribute to James Brown by performing his classic “It’s a Man’s Man’s Man’s World” as their finale. 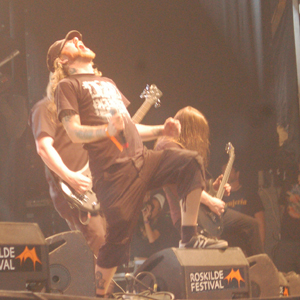 For metal fans day four had some of the best the genre has to offer. Sweden’s At the Gates pummeled the audience with brutal double bass drumming and a double guitar attack. Using a variety of instantly recognizable riffs and a monstrous dry lung vocal the band sounds something like Machinehead would if Fear Factory’s Burton C. Bell were singing. And, not to be outdone, the heavyweights themselves Slayer took to the Orange Stage late in the afternoon for a set filled with essential metal classics from their back catalog. Along with recently returning original drummer Dave Lombardo, guitarists Kerry King and Jeff Hanneman and bassist/singer Tom Araya are a force to be reckoned with. Araya’s voice is as sharp and intense as ever, King and Hanneman solo and riff with razor-like precision and Lombardo drums with a tenacious ferocity unparalleled amongst his more-than-capable peers. 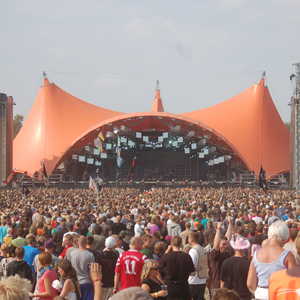 For a festival set which are normally short, Slayer made this their own personal “Greatest Hits” set, playing most of their seminal classics. Christ Illusion‘s “Jihad” landed smack dab in between early cuts “Chemical Warfare” and “Die By the Sword” and “Dead Skin Mask,” “South of Heaven” and “Raining Blood.” The chemistry the four players have with each other is effortless; nary a note is in the wrong place. And just like in their encore (“Mandatory Suicide,” “Angel of Death”) it’s that their songs are recognizable and memorable that helps etch them into your brain. Not poppy or hook-y, but composed so excellently that it makes you want to head home and play the licks on guitar yourself.

Following The Chemical Brothers outstanding set the night before electronic-based acts Hot Chip and Fuck Buttons gave their own unique spin on the bleeps and bloops of dance music. Fuck Buttons took a decidedly noisy approach, using warm analog noise layered under waves of tremolo effects. While not music that inspires booty shaking, there was an undulating rise and fall to the band’s sound. One that showed a melodic motif without being quite as overpowering as Mogwai was a few days earlier. The two band members thrashed about occasionally adding in distorted or delay-ridden vocals through hand mics kept near their electronics. Hot Chip, on the other hand, was centered on pulse pounding dance beats. The hilarious refrain of “I’m only going to Heaven / if it feels like Hell / I’m only going to Heaven / if it tastes like caramel” from “Hold On” and the bounding bass of “Bendable Poseable” drove an immense crowd (the first real sign of rain forced everyone into their tent) to joyous dancing. Hit single “Over and Over” frenetically had the fans enraptured in spite of the how over filled the Arena Stage was. 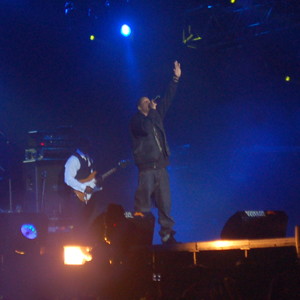 And last but certainly not least Jay-Z topped off the whole festival his Orange Stage performance supported by a full band. Joined temporarily on stage by Memphis Bleek, Jay-Z coolly and calmly rhymed his way through a stellar set undaunted by what was a decent spat of rain. Alternating between recent material (“Roc Boys” from American Gangster) and tracks that made him a star (“Jigga What, Jigga Who,” “I Just Wanna Love You (Give It 2 Me)”) the hits were what made this set. Jay-Z’s cadence was top-notchâ€”a laid back flow made the catchy chorus of “Dirt Off Your Shoulder” and cowbell-punctuated quasi-metal of “99 Problems” both moments invoking huge reactions from those in attendance. Playing into what could’ve been adversarial conditions, Jay-Z made light of the rain by playing a segment of Rihanna’s “Umbrella” through the PA and even doing an almost impromptu rendition of Prince’s “Purple Rain” right as the rain stopped. The set ended with a trifecta easily provoking the crowd to rhyme along–“Big Pimpin’,” “Hard Knock Life (Ghetto Anthem)” and “Encore”–proving each track has become strangely timeless and anthemic.