By day three of the already amazing Roskilde Festival, fatigue begins to set in. Depending on the festivalgoer, legs begin to plod from nonstop walking, conversations become incoherent from excessive drinking, or eardrums rattle from overexposure to massive speakers. Would those venturing to Denmark be daunted by the cold, cold night or being up till 4:00 A.M. following The Streets’ knockout late set? Hardly. 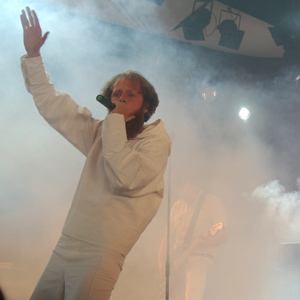 Prominent local acts Efterklang and A Kid Hereafter in the Grinding Light kept spirits high through unique takes on tried-and-true styles. A Kid Hereafter is a vehicle for numerous experiments from Frederik Thaae. This year, A Kid Hereafter performed three distinct forms of these experiments. While Thaae’s sound typically leans toward pop punk and symphonic rock, the humorously titled A Kid Hereafter in the Grinding Light is best described as brutal thrash metal. Opening the set with a fake-out complete with him and his backing band adorning pure white suits, the music suddenly shifted into an all-out assault of drums and guitars best described as stylistically close to The Locust. In far lighter territory, Efterklang’s set was delayed thirty minutes by fans flooding the Astoria Stage’s tent to flee a short breakout of rain. Once underway the seven-piece band utilized horns, violin, computer 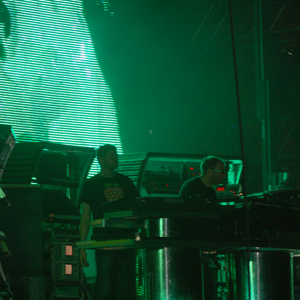