For those unaware, the quaint town of Roskilde on the main island of Denmark (just west of Copenhagen) has hosted its own mammoth music festival for nearly 30 years. One of the longest-running alongside the United Kingdom’s Reading and Glastonbury festivals, the lineup for each year’s festival has grown to mammoth proportions. This year’s festival started close to 5 o’clock on Wednesday, opening with Delaware stalwarts Clutch. 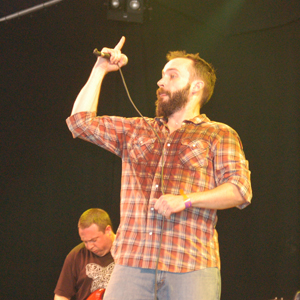 With blasts of wah, singer Neil Fallon sang a throaty “Hey! What’s that smell?” on opener “Who Wants to Rock.” The band showcased a groove-based, uptempo rock sound, guitars and bass mimicking each other’s scales. Even early ’90s single “Shogun Named Marcus” was sung in a way that was strikingly less heavy metal than how it was originally released. After over 15 years of touring and releasing countless excellent albums, there live sound is closer to classic southern rock then straight metal. Both guitar players could solo with ferocity and the bass player Dan Maines drive the pulse causing the audience to clap enthusiastically. Fallon’s vocals of “And a razor back boar in the back of a jacked-up Ford” on “Cypress Grove” had the crowd cheering every time. 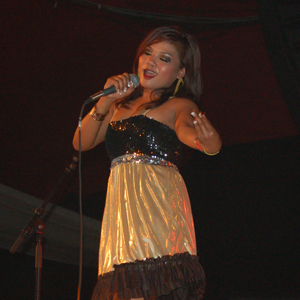 Next, at the Astoria Stage, Dengue Fever created a jolly dance vibe. Cute, pixie-size singer Chhom Nimol swayed back and forth through each number, operating entirely in a unique higher register. The band used theatrics to punctuate their jazzy, Cambodian style, sinking to the ground as the tempo slowed on “Shave Your Beard.” “Tiger Phone Card” and “Sober Driver” drew loud responses from the crowd, the former a poppy number with the demanding line, “You only call me when you’re drunk.” Enjoyably combining lush keyboards and stark saxophone, the band’s popularity is sure to rise even further still. 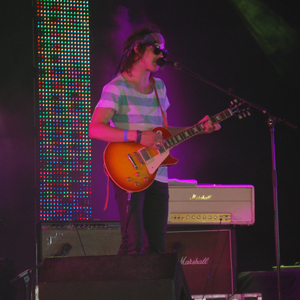 MGMT got off to a late start following Clutc’s performance earlier at the Odeon Stage. The group harnessed a quasi-psychedelic sound that would build tension until a rocking conclusion. “Weekend Wars” received an ovation of gratitude from the fans akin to a tried-and-true hit, in spite of the fact that it’s less than a year old. 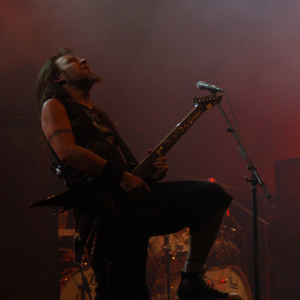 On the far side of the festival at the Arena, British heavy metal newcomers Bullet for My Valentine were whipping the crowd into a frenzy. While the crowd moshed up at the front for “Eye of the Storm” and “Spit You Out,” singer/guitarist Matthew Tuck and lead guitarist Michael Paget shredded killer riff after killer riff, rolling one into the other, slowing down only sporadically for small segues. Paget and bassist Jason James provided growling metal grunts while Tuck took lead with a cleaner timbre on “Deliver Us from Evil.” The group ended their set with a proclamation from Tuck of, “Let’s fucking destroy this place!”inciting the audience to have as many participants crowd-surf as humanly possible during their excellent finale â€œWaking the Demon.â€ 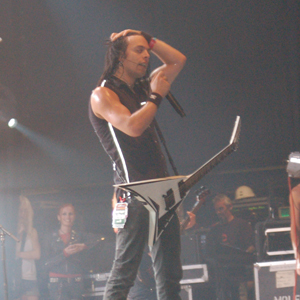 And as a fitting end to an epic festival, Radiohead closed out the night at Roskilde’s Orange Stage (main stage). In an amazing set, the band played every song from recent mxdwn Album of the Year winner In Rainbows, save for “House of Cards.” The rocking “Jigsaw Falling Into Place” and “Bodysnatchers” had the crowd jumping while softer tunes such as “Faust Arp” (featuring only Thom Yorke and Jonny Greenwood on acoustic guitars) and the piano-laden “Videotape” provided depth and variety, however the strongest of these were the soulful bass-driven ballad “Nude” and the gentle “All I Need.” After opening with the syncopation of “15 Step,” they proceeded to alternate between In Rainbows tracks and warmly received classics. “The National Anthem,” “Everything in its Right Place” and “Idioteque” from the band’s essential Kid A delved into the band’s more experimental side, eschewing standard guitar/bass/drums format in favor of more electronics, keyboards and even a hand-held radio wired through effects. 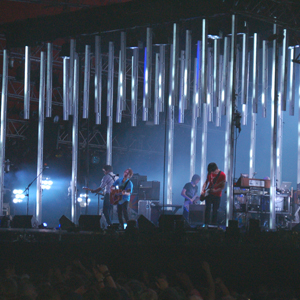 The gloomy glaze of “The Gloaming (Softly Open Our Mouths in the Cold)” curiously popped up midway into the set, a wedge between adjacent pockets of excellence. Hail to the Thief’s opening track “2 + 2 = 5 (The Lukewarm)” began a second encore for the group with commanding presence, but it was the songs from OK Computer that unified the crowd in attendance. Yorke dedicated “Paranoid Android” to anyone who had ever “scored some bad drugs,” “Exit Music (For A Film)” successfully brought out the haunting power of the song even further and “Karma Police” gathered the crowd into a rousing chorus of “for a minute there / I lost myself / I lost myself.” 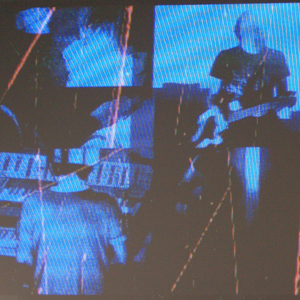 In similar circumstances, most bands of this degree of prominence that would attempt to play this much of a brand new album would end up leaving their fans disappointed. This kind of self-indulgence normally would not fly, but Radiohead are a different animal. Whereas most bands hit their stride early, riding the wave out as long as they can and ultimately find themselves pulled backwards by the undertow, Radiohead is the wave. We’re all trapped in their undertow. Album-by-album they pull us forward with them, demanding our patience and slowly creating new classics each time.