Few bands have accomplished as much as Ministry has in the modern era of music. Started as a techno-pop group with serious disco leanings in 1981, Al Jourgensen’s band has evolved through several entirely different phases. Starting from the dance-focused early days, they became one of the progenitors of the industrial sound, then abruptly were one of the first to combine the sound with hard rock, ultimately shifting into what could be deemed industrial metal–the framework that ultimately saw the entire scene brought to the mainstream. After Jourgensen sank into a well-publicized battle with heroin addiction, Ministry drifted into a form of less-inspiring slow doom metal. Jourgensen triumphantly emerged some years later, heroin-free and rededicated to his flagship project, only now without longtime principal band member/bassist Paul Barker and with a renewed vitriol for President George W. Bush and his foreign policy.

While still akin to the industrial metal sound of yore, the three albums in this recent resurgence (Houses of the Mole, Rio Grande Blood, The Last Sucker) are heavy metal at its finest–raw, brutal, riffy and confrontational. Ministry’s approach to metal is perhaps best informed by their many years trailblazing other styles. Jourgensen’s bold notion of composition transcends the conventional guidelines in which most artists find themselves trapped. The band’s April 6th show at the House of Blues in Los Angeles, on their final tour dubbed the “C U La Tour,” was evidence of why this outsider understands what makes metal compelling more than many of the genre’s stalwarts ever have. 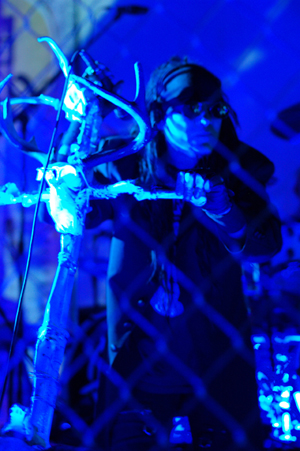 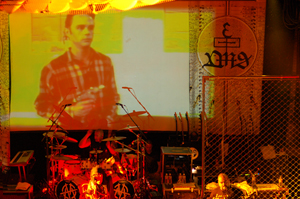 The band’s first set was a smattering of songs from the three anti-Bush records. Thrashing behind a massive steel fence forming a “U” shape at the front of the stage, and vaulted by incendiary images blasting religion, government and war, Jourgensen roared through “Watch Yourself,” “Life is Good” and “The Last Sucker” whipping the crowd into a rabid frenzy. Sin Quirin and Prong’s Tommy Victor led the assault on guitar, sporadically shaking the fence or, in Victor’s case, propping a guitar onto the fence for precision moments of feedback. A twisted sample of Bush’s voice triggered by keyboardist John Bechdel opened the utterly ferocious “Rio Grande Blood,” greeting the crowd with transposed words: “I am a weapon of mass destrcution / I am a brutal dictator / I am evil.” 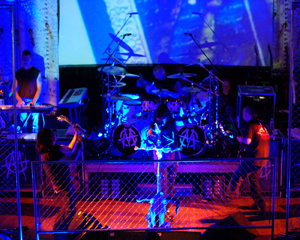 The tracks “Lieslieslies” and “The Great Satan” brought the floor into a raging circle pit. “Lieslieslies” in particular became epic as each progressive melody further ensnared the listening crowd, not by being a hook but by being memorable, inciting head-banging, toe-tapping or fist banging depending on individual preference. Jourgensen presided over it all like the confident father of the genre he is, howling with a wave of distortion on his vocals, thrashing behind a custom microphone stand adorned with cow skulls and other dark imagery. He challenged with indignation the Bush administration on “Waiting” demanding, “I’m still waiting!” 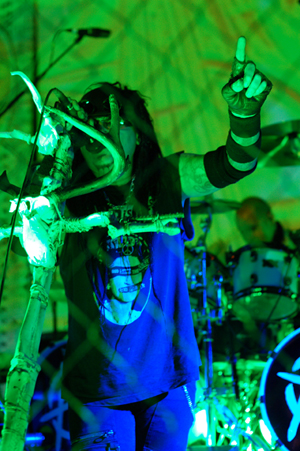 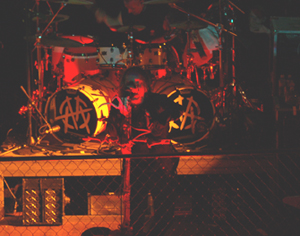 Following a brief break, an escalating flood of feedback introduced the opening bass riff to the classic The Mind is a Terrible Thing to Taste track “So What.” Joined by Static-X’s Wayne Static, the band rocked the eight-and-a-half-minute song bringing the crowd along for each angry chant of “So What?” coming as close to a metal sing-along outside of Pantera’s “Walk” as imaginable. Jourgensen then introduced Fear Factory’s Burton C. Bell for a trifecta of Ministry’s best material, “N.W.O.” and “Just One Fix” from Psalm 69 and “Thieves” from The Mind is a Terrible Thing to Taste. Even after 16 years, the sample-laden climax of “N.W.O.” is still a thing to behold. In an egoless display Jourgensen let Bell sing lead vocals until “Thieves,” stepping back to play extra guitar while Bell delivered in his trademark monster growl. 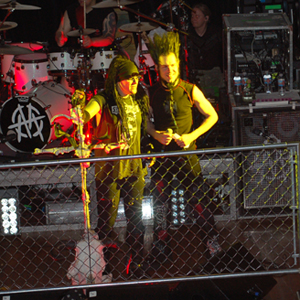 The band then finished off with three songs that Bell humorously referred to as “Ministry karaoke,” playing ZZ Top’s “Just Got Paid,” The Doors’ “Roadhouse Blues” and The Rolling Stones’ “Under My Thumb” from their recent Cover Up collection. Bell’s lead on “Under My Thumb” was riotous fun, and all three cemented a strong, happy vibe to close out the evening, which was tremendously helpful considering the serious nature of most of the show’s lyrical subject matter.

Looking back on 28 years of groundbreaking material, it’s hard not to be slightly saddened by the exit of Ministry. Jourgensen has spoken in detail about his plans to put Ministry to rest following this tour to focus more on his own 13th Planet Records. Music has increasingly become a “safe” industry where many musicians shy away from challenging material or abrasive content in favor of widespread acclaim and success. Ministry have been a vital voice supporting diversity, evolution and dissent. Jourgensen’s work should serve as an exemplum to all genres–not solely metal–of the need to challenge one’s self and surroundings. To paraphrase the night’s fantastic opener, “Let’s go insane!” 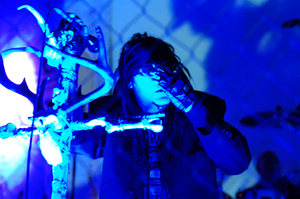 Farewell Ministry. May all the years to come herald your contributions to music.