Pardon the interruption, but a cardinal rule of journalism is about to be broken: the insertion of the personal—the I, me, mine, myself of it all—into a published piece. Why abandon this Queen’s English, the indirect “we,” the self-referential third-person tense? Because, dear friends, some of the Queen’s top-tier musicians have come calling. 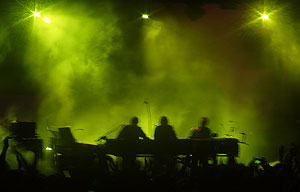 For 15 years I have followed the career of the London band Underworld, ever since Karl Hyde and Rick Smith’s recruitment of DJ Darren Emerson transformed them from also-rans of ’80s New Wave to artistes of ’90s techno. They were the first act I latched on to in electronic music, and I am forever grateful. Emerson moved on but his imprint on Hyde and Smith remains; Underworld kept producing albums full of near theatric drama, hybrids of jaunty trance, pensive atmospheres, guitar-rock flourishes and cut-up poetry.

With the exception of “Born Slippy (Nuxx)” in the movie Trainspotting, however, Underworld never really experienced true, worldwide, mainstream success on a par with big beat contemporaries like Fatboy Slim or The Prodigy. And in saying that I really mean “success in the United States,” as electronica’s popularity surge through this decade and the last fared much better beyond our shores.

In spite of that, the Underworld fandom would convince you of deafening chatter about the October 2007 release of Oblivion with Bells. No doubt that buzz began with the group’s RiverRun online music project through ’05 and ’06, continued with moody film scores for Breaking and Entering and Sunshine, and grew upon the kickoff of a world tour with some increasingly rare U.S. dates (having played here only nine times since 2000). 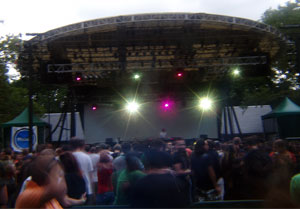 The group’s September 14th performance in New York’s Central Park would be my long-awaited first time seeing them in person. (Yes, some of these descriptions belie my status as a total UW fanboy.) My expectations had been fed by the skillful construction of their albums, accounts of foreign festival performances made legend, and occasional recordings from the stage and the club floor. I prepared myself for undulating waves of tens of thousands of ravers eating up the park’s SummerStage real estate, basking in the sonic glow of a nonstop Underworld mix for two-plus hours. The night’s reality was indeed a pleasure, but the path it took differed from the one mapped out in my head.

For starters, the Central Park space staked out for the show was Rumsey Playfield, a small artificial turf area with bleachers on one sideline conjuring images of lacrosse practice. It’s not the same kind of territory trod upon by the likes of Dave Matthews when he plays the park. A pessimist might call this a symptom of Underworld’s struggle to maintain a U.S. audience. The optimist in me calls a crowd of, eh, 2,000 under trees and sky a rather intimate setting for such a show—the concept of good friends playing in front of good friends expanded to Manhattan-sized proportions. 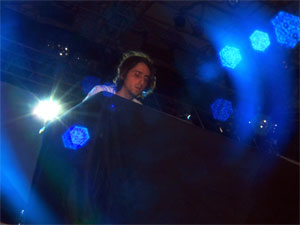 Then there was the continuity, supplied almost entirely by Underworld’s opening DJ James Holden. He’s barely past university age yet already a producer and performer of some repute, half of the duo Holden & Thompson and a remixer for Madonna, Britney Spears and Black Strobe among others. His mission: Spend 90 minutes from daylight to darkness warming up the crowd with two CD players and no microphone. Holden’s deceptively simple, invigorating set focused on progressive house, minimal techno and hybrids thereof with nods to Beck, Kraftwerk, and the occasional bigger beat and dubby echo. Hell, if you can fit Aphex Twin into a mix without actually being Aphex Twin I think you’re capable of pretty much anything involving a fader.

Underworld’s unmixed performance was my biggest disconnect of the evening. From bootlegs of club gigs through their 2000 live collection Everything, Everything and beyond, Underworld sets have included long segments where one song transitions relatively smoothly into the next, megamix-style, signature sound clips and elements of other songs hidden in plain sight. Here it was all stops and sometimes fitful starts, crystallized by the standalone feel of the beloved “Cowgirl/Rez” medley—which longtime fans know is really just the same song twice although we’re never going to complain when we hear the darn thing.

Some in the audience couldn’t seem to find on first listen many of those sonic Easter eggs, those hints of other songs snuck into the main performance. (I agree.) They also sensed Smith and frequent hired gun Darren Price were fighting to synch up assorted loops. (I disagree.) As with the issue of venue size, diehards like myself have to consider all of this as a glass half empty or half full. Underworld were either attempting and failing to recapture past glories, or they continued the challenge of applying a live-band template to electronica. I choose to believe the latter. 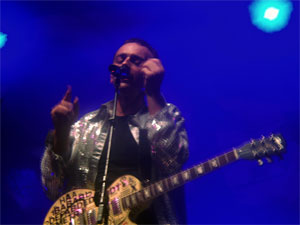 Outside of a few improvised ambient washes leading into individual tracks, only the properly titled ambient wash “Small Conker with a Twix” really bled into another named song. Fortunately for us in the crowd that song was “Born Slippy” itself, part of a favorite-laden finale with generated fog and all our hands in the air, those of us not in danced-out bliss matching Hyde non sequitur for non sequitur shouting, “lager, lager, lager.”

Even with a repertoire that can delve into darker realms—the midtempo moments of Second Toughest in the Infants, for example—having finally seen them in the flesh I can confirm Underworld’s efforts on stage to create a beacon of light in the night. Their song selection was for the most part playful and upbeat, and that feeling extended to their stage presence. With Hyde and Smith as partners in London design firm Tomato, there’s a symbiotic relationship that translates into not just cool graphics for albums and t-shirts but a reputation for stunning production visuals. The band crowded the stage with phallic yet toylike inflatable tubes designed by American artist Paul McCarthy, barricading themselves for a while after Second Toughest stomper “Pearls Girl.” 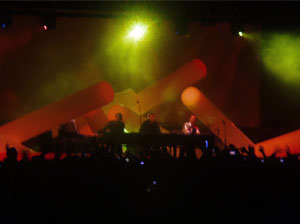 Shots of classic video games such as Pong and Space Invaders, however, comprised the show’s most telling design element. With that footage backing new music like the slow-burning grooves of “5 Foot 5” and “Beautiful Burnout,” Underworld appear to set up Oblivion with Bells from title onward as a metaphor for these playthings of a bygone era: Blow something up and be rewarded with entertaining sound. Extend and apply it to war and the talking heads surrounding it, apply it to the invoked images and spirit of Underworld’s 1993 breakthrough dubnobasswithmyheadman, apply it to nothing at all—play the band’s game-within-a-game. 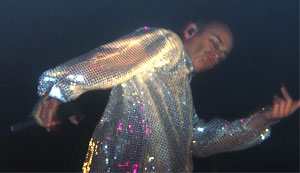 On top of this, Hyde seems to relish the role of a frontman in general and a showman in particular. Wearing a silver sequined jacket to stand apart from Smith and Price, his histrionics included literal statements (“Celebrate!”) and free verse (“Space is the place!”) encapsulating the joy in Underworld’s return to the city that never sleeps. Hyde patrolled the stage edge during a rousing “New Train” and extreme-zoomed a miniature camera on himself for “King of Snake.” 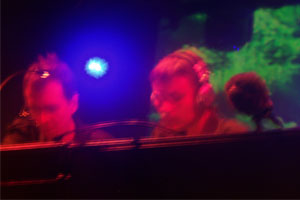 He even cloaked himself in pretend magnanimity, stepping aside as Smith and Price brought the house down with “Rowla”—a slightly slower and more deliberate version, full of additional scratches and drum breaks that show Underworld informing (and blurring the line between) rave and nu-rave, suggesting there would be otherwise be no Justice in the world. The remainder of the night’s new music inspires visions of great things: First single “Crocodile” is a legit monster while “Glam Bucket” is an epic that somehow sneaks up on you. Other older songs such as “Two Months Off,” “Luetin,” and encore “Jumbo” remind us why they were favorites on their respective albums.

And yet… as good as this show is, with all of my internalized anticipation, I certainly can’t call it my favorite show ever. I don’t think I can even call it my favorite show of 2007. And yet again… doesn’t that anticipation by default make this a memorable event, if not for the city or the band then at least for me? I like to think so. So I leave New York behind with a strange jumble of emotions—but leave Underworld behind? Never.