The Gorillaz have just announced their first North American tour in 7 years called the Humanz Tour. The tour is set to begin on July 8 in Chicago at the Huntington Bank Pavillion and run through till they finish at the III Points Festival in Miami. For many of the shows there will be a special ticket and album and ticket bundle available. All dates for the tour and the tour flyer can be found below.

The tour will bring Damon Albarn and Hewlett’s characters to life as they are joined on stage by “flesh and blood musicians,” as the press release called them. They are Murdoc Niccals, Noodle, Russel Hobbs and 2D. There is also set to be shows that will have the Gorillaz and the before mentioned joined on stage by featured artists, creating endless possibilities with the new album’s music. These featured artists include Jehnny Beth (Savages), Danny Brown, Benjamin Clementine, De La Soul, D.R.A.M., Peven Everett, Anthony Hamilton, Grace Jones, Zebra Katz, Kelela, Mavis Staples, Vince Staples, Popcaan, Pusha T, Jamie Principle and Kali Uchis, among others.

Ticket sales for the Humanz Tour will begin on April 21 here. The instructions for the specially indicated bundle dates will be sent out via email shortly after the ticket purchase. If you happen to purchase your ticket after the April 28 released date of the bands forthcoming album, Humanz, the instructions get emailed 7-10 days after your purchase. 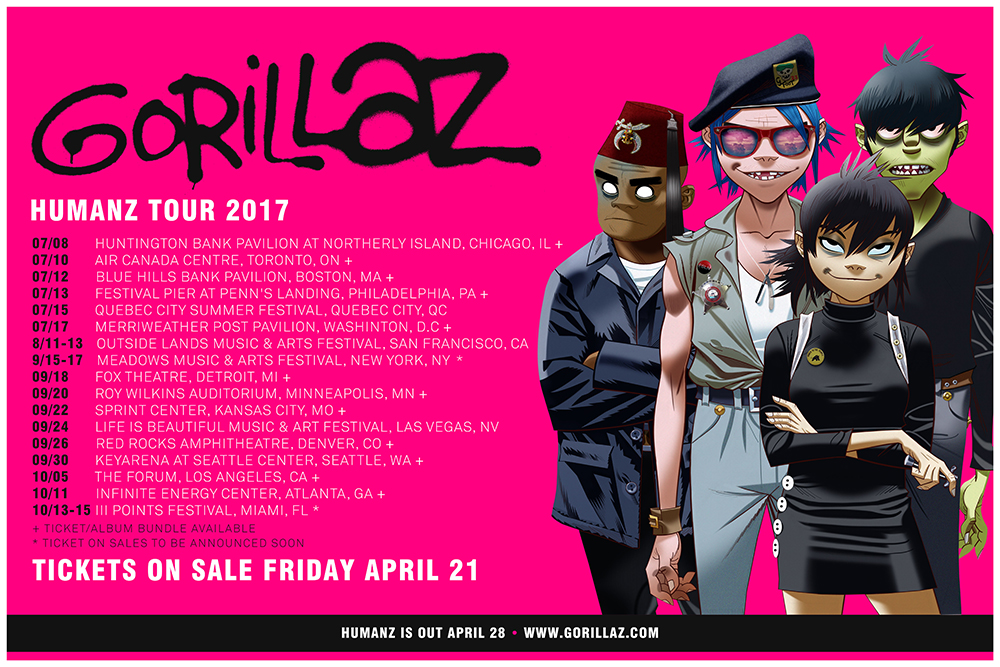 UPDATE (5/26): Gorillaz have announced Danny Brown and Vince Staples as their tour openers, according to Spin.