Red Hot Chili Peppers’ Flea and Anthony Kiedis are hosting a benefit on October 30th in honor of their non-profit organization, Silverlake Conservatory of Music. Read more for details. 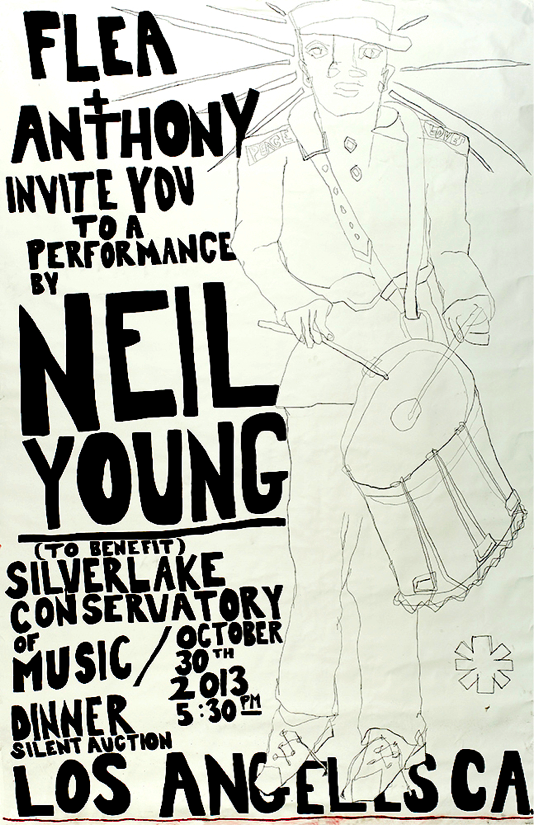 Founder of the Silverlake Conservatory of Music non-profit organization, Red Hot Chili Peppers’ Flea is hosting a benefit event in Los Angeles on October 30th. In partnership with fellow band member Anthony Kiedis, the benefit event will feature a silent auction and dinner. The goal of this benefit is to raise funds to purchase a permanent facility for the organization, as well as expand their scholarship program. The event will take place in Silverlake, CA and will feature performances by Neil Young and Red Hot Chili Peppers, in addition to the auction.

“Going into our 13th year of the Silverlake Conservatory of Music, flourishing with 700 students as a non-profit community music school, I could not be more grateful for all the people who have helped us out along the way. Having one of my favorite musicians Neil Young perform to help out the school is the greatest blessing! This is gonna be the funnest fundraiser ever! All of us working together, making L.A. a better city, and educating the kids! Yay!” said founder Flea.

The donation amount to attend the event is $2,000 per guest, or tables of 10 for $25,000. All food and beverages will be catered by Heirloom LA, Intelligentsia Coffee, Bar Stella, and Silverlake Wine.

Earlier in June 2013, Flea and his band Atoms for Peace played a secret show in Los Angeles in benefit of the Silverlake Conservatory of Music. Footage was released of the secret performance and the band was also seen performing their tracks “Default” and “Harrowdown Hill” on the Daily Show with Jon Stewart.