Dark, Loud and Awesome – Type O Negative and Hatebreed Live at the Avalon

Reaching into the darker side of hard rock in a time beset with pop sensibilities, the unlikely pairing of Type O Negative and Hatebreed filled Hollywood’s Avalon with a different breed of enthusiasm. On the one hand, Type O Negative’s trademark goth metal joyfully toys with sarcasm, drawn-out dirges and progressive composition, while Connecticut hardcore icons Hatebreed find self-confidence and optimism in embracing abrasive, confrontational fury. Teamed together on this year’s Jagermeister Music Tour, the two bands proved heavy music is as vital as ever.

Starting off with a stage adorned with green mannequins outfitted with long manes of gothic black hair and orange leis were Type O Negative. Bass player/singer Peter Steele looked gangly. Towering at 6’6″ with shaved eyebrows, Steele milked the crowd for cheers after pretending to make out with the mannequins. 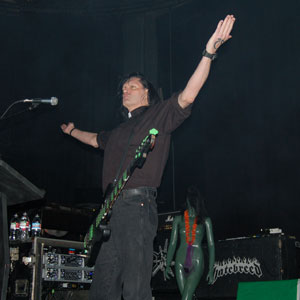 He stated simply, “We’re Type O Negative from Brooklyn,” and the band revved up its gloom and doom without hesitation. They thrashed out the (relatively) short “Kill All the White People” from their 1993 smash Bloody Kisses, guitar player Kenny Hickey joining in an appropriate snarl for the tune’s chorus. 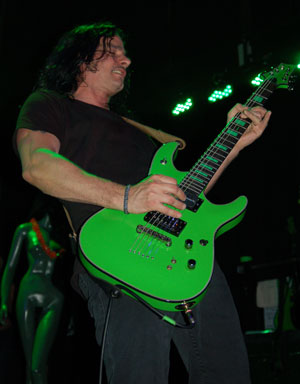 The band segued into the long dirge “World Coming Down,” occasionally tweaking their guitars with screwdrivers. After “Some Stupid Tomorrow” the group then went into another of their most revered tunes, the pseudo-heretical cock-rock anthem “Christian Woman.” The crowd sang along with smiles and excitement to Steele’s ultra-low delivery of “Body of Christ” as the song shifted into its hilarious second movement. 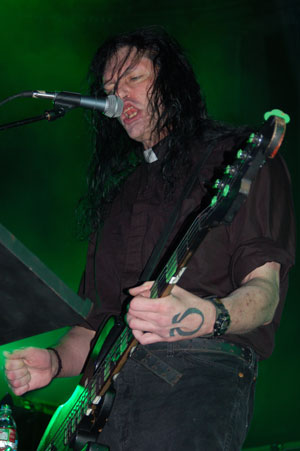 Leaving out nary a nuance of the song, keyboardist Josh Silver triggered chirping bird samples as a clean guitar greeted the words, “She’d like to know / God / Feel, feel, feel / a God / inside of her / deep inside of her.” The distortion returned for the song’s knockout finale (“Jesus Christ looks like me”) as the crowd moshed along. 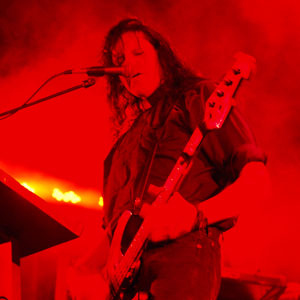 Following the slightly longer “Kill You Tonight” was the coup de grace, “Black No. 1,” perhaps the band’s most famous single. Complete with its third guitar solo, Addams Family organ lines and the unforgettable bridge lyric “Loving you / loving you / love, loving you / was like / loving the dead,” the song is remarkably self-indulgent fun, even 15 years after its release. 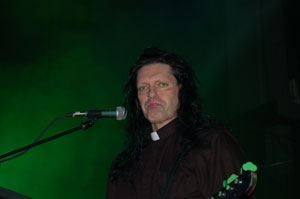 Hatebreed, on the other hand, put together an all-out assault. The five-piece brought the entire room to its feet no more than ten seconds into their first song. Founding member and hardcore institution Jamey Jasta bounced endlessly, shouting “Stay true to yourself” from Perseverance‘s “Proven” like a buzzsaw. 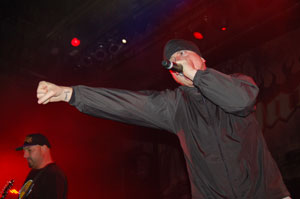 And in spite of what a layman might initially think with song titles such as “Smash Your Enemies,” “Destroy Everything” and “A Call for Blood,” the group’s message was consistent: a dedicated and unflinching determination to maintain integrity regardless of outside influences. Call it the hardcore battle cry. 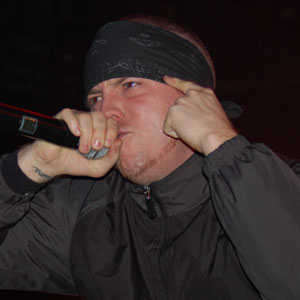 Guitarists Frank Novinec and Sean Martin pummeled the audience with the deepest of chugging metal-inspired riffs. It was the kind of rollicking freight train that never rests long enough for one to wonder if a bad decision has been made climbing aboard. 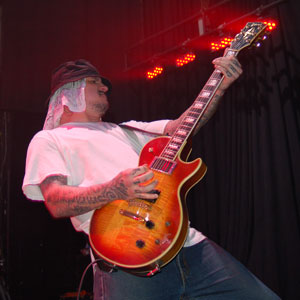 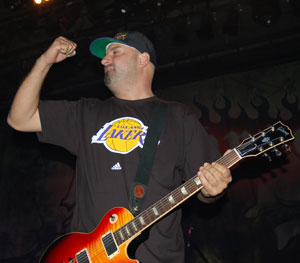 “Burn the Lies,” “Last Breath” and “Empty Promises” greeted dedicated fans of the group’s now decade-old Satisfaction is the Death of Desire, as the brutal rhythm section of bassist Chris Beattie and drummer Matt Byrne perfectly punctuated each progressive highlight. The drumming would’ve been worth the price of admission alone. 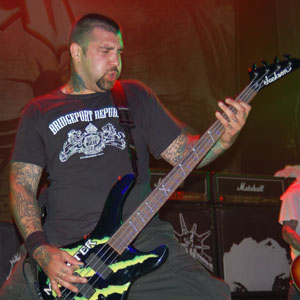 Jasta’s brand of dry-lung vocal helps make Hatebreed’s performance distinct in a way few bands of this genre can touch. There’s enough enunciation through each shouted line that nearly all lyrics are comprehensibleâ€šÃ„Ã®a feat perhaps unnoticed by those thoroughly accustomed to the genre’s gravel vocal intonations, but worth touting to anyone hesitant about giving heavy music a chance. 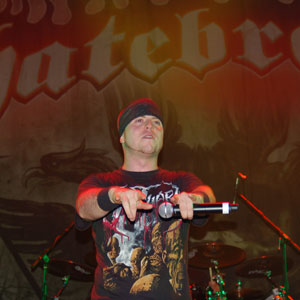 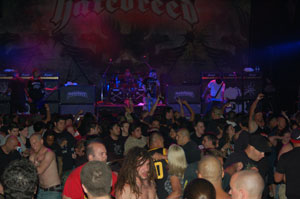 Fittingly, the band then went into “Live for This,” prompting a cathartic frenzy while the crowd chanted along. It was a sterling reminder of the outstanding merit heavy music has always had. The ability to turn rage into joy, sorrow into humor and confusion into confidence is a trait not easily dismissed. With any luck, quality stalwarts such as Type O Negative and Hatebreed will continue to hold the flag high for generations to come. 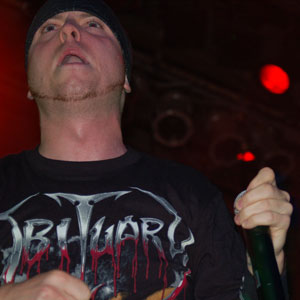