Corneliusâ€šÃ„Ã®a collective twist of music’s kaleidoscope fronted by Keigo Oyamadaâ€šÃ„Ã®is to Japan what someone like Beck is to America and what Stereolab (or possibly Cornershop at their peak) are to Britain. Ably fitting off-kilter electronics and the occasional pummeled guitar into selections from the broad spectrum of indie-pop, Cornelius creates compositions that are by turns saccharine and deceptively simple, or dense with almost theatrical power. As most of Cornelius’ catalog is generated by Keigo alone, he needs to have an exact arranger’s hand, performer’s ear, and stylist’s eye. That attention to detail manifested itself in three dimensions on the tour in support of the latest Cornelius release, Sensuous. 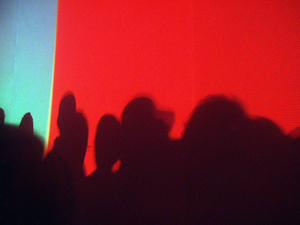 When Keigo’s “Sensuous Synchronized Show” visited Philadelphia’s Fillmore at the TLA, their last American tour stop of the spring, it was very obvious that the focus was on synchronization: professional competence almost to a fault, or maybe with the nod to trade show keynote presentations in the concert’s opening projections it was a known conceit. Keigo’s songs were fleshed out by a trio of backing musiciansâ€šÃ„Ã®Hirohisa Horie on keys and guitar, bassist Hirotaka Shimizu, and Yuko Araki on drums on fluteâ€šÃ„Ã®and visuals all serving, more often than not, to exactly mirror their original music-video format. Were it not for the spare, perfectly timed yet bracing lighting effects that supported and occasionally replaced the artsy footage, one might have thought the live incarnation of Cornelius served only as accompaniment to short animated films.

Don’t assume, however, that Cornelius makes purely soundtrack material even if his live show is mostly about triggers, choreographed orchestration, and every player hitting their racks of chimes just so. Keigo and Hirohisa’s chugging riffs powered “Gum,” one of the hardest tracks from Sensuous, and scored the loudest cheers of the night during Point‘s “I Hate Hate” and its start-and-stop antics a la Ministry’s “TV II.” Much of the rest of the show, however, was decidedly focused on Keigo’s brand of intelligent, digitized post-rock liteâ€šÃ„Ã®and nobody was complaining. Twice during the performance Cornelius strung together triads of songs (“Drop”/”Point of View Point”/”Count Five or Six” and “Beep It”/”Star Fruit Surf Rider”/”Fit”) that highlighted many of the shiny facets of his jewel of an electro-pop career: jazzy time signatures, funky workouts and microhouse beats.

And sometimes, even when the band was telegraphing what they were doing to and for the audience, the message was welcome. Cornelius’ “Fit” video footage of floating household items and snack foods (or that of “Beep It,” with its spinning rooms and alternating on/off light sources) may have introduced nothing new to diehard fans, but was no less fascinating to watch. Keigo also did his best to lighten up potentially dull moments: inviting a fan to help him play a theremin, offering a sampler to the front row amid a squall of encore feedback, even leading all of the players in switching instruments during soft show closer “Sleep Warm.” 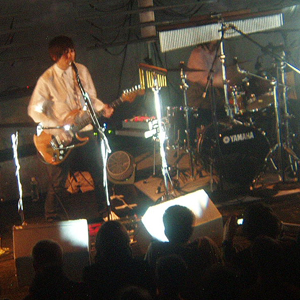 All things considered, Cornelius’ “Sensuous Synchronized Show” seems to work better in smaller doses: The full band’s 50-minute turn at the 2007 Coachella Festival was phenomenal, while their complete concert morphed into something of an exercise for fans by the end of the night. Yet even with the need for much of this music to be contrived onstage, itâ€šÃ„Ã´s still a trip to hear. Keigo’s underexposure to American audiences is criminal, so even too much Cornelius is a far sight better than no Cornelius at all.